BACKGROUND: Members of Congress and NFL alumni team up against the U.S. Capitol Police for the seventh edition of the Congressional Football Game at Watkins Recreation Field. The game was founded in 2005 following the loss of two U.S. Capitol Police in the line of duty. 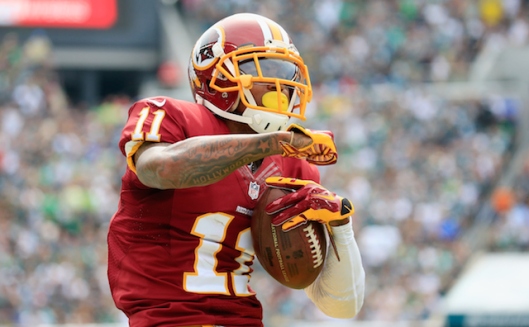 Washington Redskins wide receiver, DeSean Jackson, will conduct the coin toss along with his mother, Gayle Jackson, President, of The DeSean Jackson Foundation (www.deseanjacksonfoundation.org). The foundation was founded in 2009 after DeSean’s father, William “Bill” Jackson, died from pancreatic cancer during his rookie year with the Philadelphia Eagles.

Tickets: $10 in advance at congressionalfootballgame.org

The acclaimed stage and screen actor is a racing enthusiast who competed in the 2002 Toyota Pro/Celebrity Race on the streets of Long Beach.  Best known for his roles in “Star Trek: The Next Generation” and the X-Men franchise, Stewart returns to series television later this year starring as the title character in “Blunt Talk,” a half-hour comedy executive produced by Seth MacFarlane and Jonathan Ames for Starz.

Saturday’s Grand Marshal, Washington Redskins’ wide receiver and punt return specialist, 3X pro footballer DeSean Jackson, is a three-time NFL Pro Bowl selection who prepped at Long Beach Poly High School before going on to stardom at the University of California, Berkeley, and with the Philadelphia Eagles and was acquired by the Washington Redskins in 2014.  DeSean Jackson, and his mother, Gayle Jackson, are the co-founders of the DeSean Jackson Foundation, a public charity founded in 2009 in memory of William “Bill” Jackson who died from Pancreatic Cancer while DeSean Jackson was a rookie with the Philadelphia Eagles.

Vince Neil. of Mötley Crüe. will wave the green flag as Saturday’s Honorary Starter and will also star later that evening in the “Rock-N-Roar” Concert, free to race ticket holders.  On Sunday, Honorary Starter honors fall to long-time open-wheel and sports car driving star Adrian Fernandez, who is enshrined on the Long Beach Motorsports Walk of Fame.

Saturday’s national anthem singer will be Karla Mosley, who has appeared in “Hart of Dixie” and currently is a regular on TV’s popular “The Bold and the Beautiful” and, on Sunday, actor/musician James Maslow, a competitor in Saturday’s Pro/Celebrity Race and the star of the top-rated Nickelodeon program, “Big Time Rush,” will sing the anthem before the IndyCar race.

Team Fastrax, a famous sky diving team, will be bringing in the American flag both Saturday and Sunday, courtesy of team members Paul Stanford, Jay Stokes and Hollis Collins.

Sunday’s invocation will be given by Father Glenn O’Conner, Catholic Chaplain with the Verizon IndyCar Ministry.  And, our nation’s colors will be presented on both days by Alpha Company, Recruiting and Retention Battalion, California Army National Guard.

Thomas Musser earned the nickname Mr. Strong from his hard fight with acute lymphoblastic leukemia. Every year since his death at age 9 in October 2010, Thomas has been remembered through a community event – Mr. Strong Family 5K Run/Walk.

“Our annual event is our community’s way of remembering Thomas and thanking the doctors and nurses at St. Jude Children’s Research who work so hard taking care of the children fighting cancer,” noted Susan Spraker, a family friend of the Mussers and one of the organizers of the 5K run/walk.

Set for Saturday, Dec. 6, at the Rural Retreat Fire Station, this year’s Mr. Strong Family 5K Run/Walk is evolving into a major fundraiser. It kicks off with registration at 9 a.m. and run at 10 a.m. followed by the kids’ run.

The auction will feature several sports-related items. Included will be team donations from the Carolina Panthers, Atlanta Hawks, Pittsburgh Pirates and the Washington Redskins’,  DeSean Jackson.

Thomas Musser was diagnosed with leukemia three months from his fourth birthday. He, his parents, Ed and Lisa Musser, and twin brothers, Matthew and Andrew, moved to Memphis, Tennessee, so Thomas could have the best treatment possible for his type of childhood cancer.

Eight of the family’s friends from Rural Retreat, including Susan Spraker and her dentist husband, Michael Spraker, went to Memphis in December 2006 to run the St, Jude Marathon in honor of Thomas. The group raised $5,000 given in Thomas’ name to help continue the research to find cures for childhood cancers.

Susan Spraker recalled, “On that freezing night, we turned the corner around mile six and ran through the St. Jude campus. On our right, we saw Thomas and his family holding up signs and waving to encourage us on.”

She added, “We waved to patients bundled up in wagons with chemo IV poles attached, parents holding little bundles with bald heads covered with toboggans, and doctors and nurses cheering along the streets.”

The Rural Retreat delegation determined to bring that experience home with them. They organized the community 5K run/walk.

This will be the second year that DeSean Jackson, Washington Redskins’ wide receiver, and CEO, of The DeSean Jackson Foundation has partnered with the organizers of this event by lending his name, support and staff to help raise awareness and funds for St. Jude Children’s Hospital in Thomas Musser’s memory.  Jackson’s foundation was founded in 2009 in memory of his father, William “Bill” Jackson who died from Pancreatic Cancer.

Each year, DeSean Jackson takes time away from advocating and fundraising for his own charity to support this worthy cause.  Jackson states, “We are One Team with One Purpose’ to eradicate cancer; and, regardless of where childhood cancer ranks in regards to other types of cancers when I child dies it is one too many.  My Pops would want me to do whatever I can to help.”