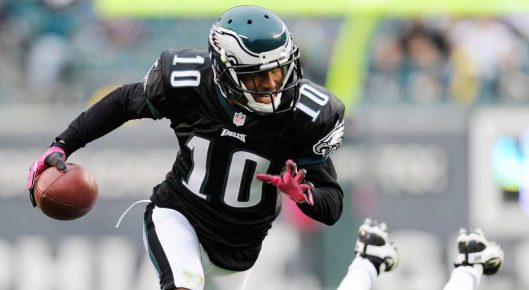 DeSean Jackson, of the Philadelphia Eagles, donated $30,000 to the Cali Bears Youth Football and Cheerleaders, an American Youth Football League (“AYF”), Southern King Conference, team, based in Los Angeles, in response to an appeal from the team to Mr. Jackson, for crucial funding to save the organization’s 2019 season. The Cali Bears Youth Football Team serves over 150 disadvantaged, inner-city youth, in South Central Los Angeles; and, was founded in 2018. Crucial funds were needed for uniforms, equipment, referee and venue fees; and, without these funds the entire season was in jeopardy.

As the DeSean Jackson Foundation’s president, Gayle Jackson emphasizes the importance of the foundation’s mission and goals. “The foundation was established in honor of DeSean’s father, William ‘Bill’ Jackson, who sacrificed his life to put his son in a position to do what he’s doing today,” Mrs. Jackson said.

Bill dedicated his life to building a structured foundation and deterrent against negative influences for DeSean by utilizing sports in his formative years. [Frequently, Bill had DeSean play for several teams simultaneously which required changing uniforms in the car between games.]

“DeSean gives back because my son believes, in his heart, that the reason he’s blessed is to be a blessing; and, DeSean also believes he is responsible for preserving Bill’s vision and instilled values to never forget where you came from and those left behind; and, sometimes that works to his detriment; but, he is indeed his father’s son.”

“That’s what the DeSean Jackson Foundation is about: Mentoring, empowering and building confidence in these young kids,” Gayle Jackson said. “To me, that can change a person’s life; and, that’s is what DeSean Jackson, the Philadelphia Eagles’ All-Pro wide receiver, has continued to do throughout his 12 years in the NFL.”

American Youth Football, Inc., established in 1996, is a support services organization, dedicated to giving back to communities by promoting the wholesome development of youth through their association with exemplary adult leaders in the sport of American football and cheer. Guidelines are established to ensure that players play in an atmosphere of learning with a competitive balance between teams. Contact: Dee Graver, National Football Commissioner (602) 283-6006. https://www.americanyouthfootball.com/index.html