DeSean Jackson, of the Philadelphia Eagles, sends his sincere congratulations to Donovan Troy, a 2020 high school graduate from Metro Atlanta, who matriculated at the University of West Georgia this week. Jackson states that he is extremely proud of Donovan’s accomplishments despite adversity; and, commends Donovan’s parents for the integral role they play. “Family is first and foremost in everything”, states Jackson, “including life in order for us to be empowered and fulfill our destiny”.

DeSean Jackson met the Donovan family in 2012 when the Make-A-Wish foundation honored a wish from Troy Donovan, a 10-year-old, to spend a day with his idol Philadelphia Eagles‘ wide receiver, DeSean Jackson.

One month after he was born, Donovan Troy was diagnosed with a life-threatening form of sickle-cell anemia. Donovan had to avoid situations that could exacerbate his condition, such as being outside in extreme heat, or even swimming. Football specifically was discouraged, especially after Donovan’s spleen was removed when he was a toddler. Donovan needed monthly blood transfusions. Contact sports could create serious complications. Donovan’s uncle, Cedric, was 32 when he died from the same condition. But Donovan loved football, and while his parents wanted to protect him, they also didn’t want him spending his whole life in hospitals. How the youngster from Atlanta became a fan of the thirteen-year wide receiver from Philadelphia remains a mystery to his family. “My husband and I were born and raised in Atlanta; so, we’re both natives, but he is not a Falcons fan at all,” Tara said. “He loves DeSean Jackson. He always talks about how fast DeSean Jackson is.”

Over the years, Tara Troy has continued to keep DeSean Jackson and his mother, Gayle, informed of Donovan’s accomplishments and also extended the unwavering support for DeSean. It began with Donovan’s wish and has developed into an “extended family”. 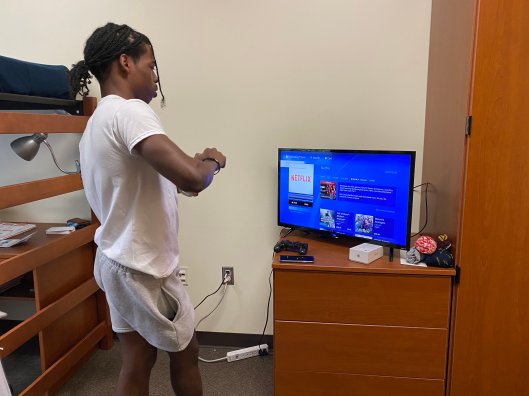 Diagnosed as an infant with a hematologic disorder, 10-year-old Donovan was told he wouldn’t be able to play sports. But he beat the odds, and his love for football and the Philadelphia Eagles made DeSean Jackson his hero, and his wish.

More About Make-A-Wish:
“My Wish” is a collaborative effort with Make-A-Wish that chronicles the granting of unique sports-related wishes for children with life-threatening medical conditions.

Make-A-Wish® grants the wish of a child diagnosed with a life-threatening medical condition in the United States and its territories, on average, every 38 minutes. We believe that a wish experience can be a game-changer. This one belief guides us. It inspires us to grant wishes that change the lives of the kids we serve.

Learn more about how you can help grant wishes at wish.org