TAMPA, Fla. — By the time Rhonda D’Haiti got to her 16-year-old son D.J. Myers’ side on July 25, 2017, he’d been strapped to a stretcher, airlifted to the hospital and was moments away from undergoing a 10-hour surgery. Unable to move from the neck down, he looked up at her and said, “If I can’t play football, I’m going to die.”

Fast-forward one year, and Myers, who is now 17, is in a wheelchair and unable to feel anything below his belly button. Football is out of the question, and he has yet to return to his regular classes at South Lake High School in Groveland, Florida. But he’s in good spirits and thriving, thanks in part to some encouragement from Tampa Bay Buccaneers wide receiver DeSean Jackson, whom Myers met in person for the first time Saturday.

“I can’t do it, I can’t do it,” Myers said, fighting back tears, burying his face in his hands and unable to look up as the three-time Pro Bowler walked toward him. “Oh my God, man. Oh my God.”

It was Jackson’s face he saw on a cellphone video, days after surgery, when he was recovering, and Jackson’s autographed jersey that came in the mail. Several friends and family members had reached out to the Buccaneers, telling them about the accident, the result of a collision during a football camp.

“What’s going on D.J.? It’s DeSean Jackson, wide receiver [for the] Buccaneers,” he said in the video. “I heard I was your favorite player. I just wanted to wish you a speedy recovery. Put God first, keep praying, I’ll pray for you as well and hopefully everything goes back to normal. I’m sorry about your injury. Get well, and like I said, put God first and God bless you. Take care, man.”

“I know he was down. I just wanted to send him an encouraging message, to not get down on himself,” Jackson told ESPN. “When you’re diagnosed with being paralyzed and not having a chance to walk, that’s definitely a devastating thing. So [I was] just trying to motivate him and cheer him up a little bit.” 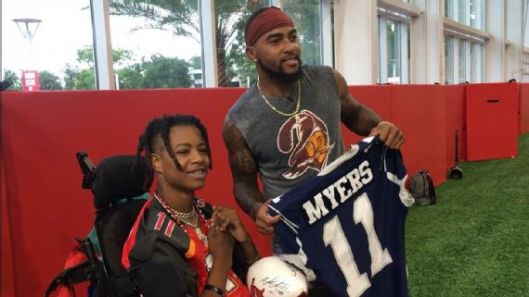 Doctors had to go through the front of Myers’ neck and then the back to remove a fractured C5 vertebra and replace it with a metal piece. A rod was inserted where he fractured his C6, fusing it with the bone. Myers had to have a tracheotomy tube put in to help him breathe. He was in the hospital for almost four months. Hearing from his hero, whom he’d followed since middle school and whose jersey Nos. 1 and 11 he wore, too, brought a glimmer of hope when Myers needed it most.

“I was really in a down place. When he sent that, it really made me want to do therapy, it made me want to get up out of the bed, just do stuff like that,” Myers said. “I was doing therapy, literally, and he sent me the video, my heart just like dropped. I was like, ‘Wow. He really cares for me.’ It really touched my heart that he did that for me. Because not a lot of players would ever be able to do that, ya know?”

Doctors told the family it’s too soon to determine how much Myers will recover. His spinal cord wasn’t severed, but there was damage to it, a condition referred to as incomplete quadriplegia. Myers has regained a small amount of dexterity in his hands. He gets severe headaches, too. Then there are the muscle spasms and stiffness in his legs. The physical therapy has been exhausting.

“It’s like you having a migraine, times 100,” D’Haiti said of her son’s condition. “I don’t know if it’s the shock that goes through his body, but [there] are times where the [muscle] spasms can be so intense that it will literally freeze him.”

Miraculously, though, Myers has been able to stay on track with his schoolwork through correspondence courses and finished last year with a 4.0 GPA. He is entering his senior year and took senior pictures with his high school teammates.

Additionally, Myers has been nominated for the Teen Leadership Council at the Arnold Palmer Hospital for Children and is now running for president of the council.

“His spirit has never faded,” D’Haiti said. “His faith has never faded. He’s still a typical 17-year-old. Like he always says, ‘He’s broken but not defeated.’ That’s his mindset that we try and keep.”

Jackson introduced him to teammates as his little brother. They talked football and video games. Jackson even said he’d get him a copy of the new Madden for his Xbox.

“Is your game nice though? Is it nice or not?” Jackson joked.

Myers snapped back, “Yeah, man, I will whoop you!”

Jackson laughed, “I’ve gotta get your gamer tag then.”

“[I told him], ‘Don’t get down on yourself,'” Jackson said. “I know it’s hard, it’s tough, especially going through therapy. [He’s] taking it one step at a time and just really trying to better himself. Mentally, just not being able to just get up and go outside and walk and play with friends, I’m sure it’s [frustrating], but I’m just trying to encourage him …”

Jackson’s encouragement means a lot, especially now. High school football is starting up again. Myers’ dream was to earn a college scholarship to play at Florida State. Now, he’s volunteering as an assistant to help the high school’s coaching staff, who honored him by retiring his jersey.

Jackson marveled at Myers’ willingness to help his teammates.