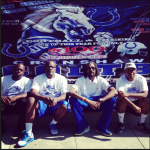 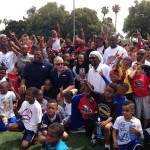 The Snoop Youth Football League is a 501c3 non-profit organization founded to provide the opportunity for inner-city children to participate in youth football and cheer. The SYFL serves children between the ages of five and thirteen, teaching them the values of teamwork, good sportsmanship, discipline, and self-respect, while also stressing the importance of academics.

The Snoop Youth Football League was founded by entertainment icon, Snoop Dogg. The fall of 2005 was the inaugural season of the SYFL, and there were over 1,300 kids in the Los Angeles area that participated. The season began in September and included seven regular season games and a three week playoff, concluding with the “Super Bowl,” at the end of November. SYFL all-star teams were chosen and participants traveled to Houston, TX. In fact, each year an all-star team is selected to travel to another city to compete with children in other football leagues. In addition, this provided opportunities for many children to ride on an airplane, travel to states that they never dreamed of going, and play in the most prestigious stadiums in the United States.

The objective of the SYFL is to provide youth, regardless of race, color, creed, or economic background the chance to learn the values of character, integrity, discipline, and team work through football and cheer; to bring all other communities together through a common interest in sports; to promote fair play and fellowship; to teach the game elements promoting safety, enjoyment, and healthy competition.