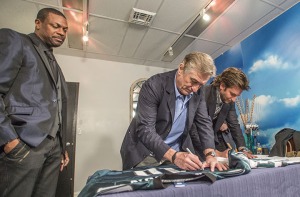 DeSean Jackson, CEO and Co-Founder, of the DeSean Jackson Foundation, and wide receiver for the Philadelphia Eagles, receives an honorable mention in the movie. Actor, Bradley Cooper wears Jackson’s jersey in the movie.

DeSean states that he is privileged and honored to be acknowledged in this manner and associated with such a worthwhile cause.