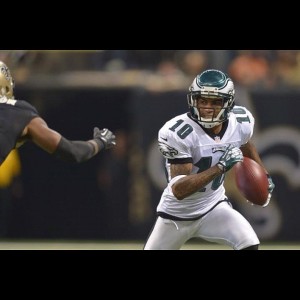 DeSean Jackson is “very excited about the opportunity” to play in Chip Kelly’s offense.

“I was looking at what he did at Oregon,” Jackson said. “My little cousin is actually De’Anthony Thomas, the Black Momba, so our styles are kind of similar. What he’s done in that offense as far as lighting it up and getting in that end zone, that’s what I’m excited about.” Thomas (5’9/173) scored 32 touchdowns in 27 games with the Ducks.

It will be interesting to see how Kelly schemes to get Jackson (5’10/175) into space. D-Jax does have 54 career rushing attempts.