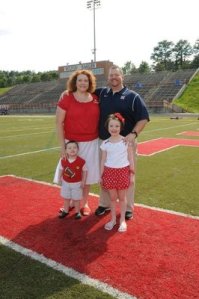 “I had the honor of holding his hand and telling him that I loved him as he drew his last breath on Earth,” Scott’s wife wrote on Facebook.

Scott was diagnosed with stage four pancreatic cancer in September after going to the doctor for acid reflux.  He was just 36 years old, and he’s survived by his wife and two small children.

Members of the community have come together to help the Scott family in wake of his tragic death.

Doug Robbins, a friend of Scott’s, is using his Christmas tree business to raise money.

“Hopefully we can raise enough money to at least be able to pay off the house, which would take a lot of stress off the family’s back and help the two little children that they do have,” said Robbins.

“All of our teachers were letting people just leave class to go to the guidance counselor,” said Luke Holmes, a student at the school.

Students at the school said it was a hard day.

“There was a lot of tests and quizzes today and in honor of Coach Scott, they moved them to later in the week,” said Tyler Roquemore.

For the last two months, the school and students have also raised money for the Scott family.

“It has to be tough on his wife, handling two kids and she’s on her own now. She was really strong through the whole thing. We just wanted to help her out, come here and help Coach Scott in general,” said Holmes,

Visitation for Scott will take place on Wednesday evening at Lakeside Funeral Home in Woodstock. His funeral will be at First Baptist of Woodstock on Thursday.

In lieu of flowers, the family asks donation be made to http://www.giveforward.com/miracleformike. An account has also been set up at Cherokee Bank in Canton, Ga. Checks can be made payable to “Scott Strong Fund.”

For more information, visit a Facebook page set up for Scott here: http://www.facebook.com/PrayersForMichaelScott