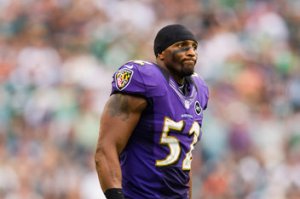 * * * * * * * * * * * * * * * *  *  * *
On behalf of the Jackson Family and Team Jackson, I extend our sincere prayers to Ray Lewis for a full, speedy recovery; and, lift him up in prayer daily as he has for so many others through his leadership and compassion for others both on and off the field.
– DeSean Jackson, Philadelphia Eagles
*******************************************************************************
By Jeff Zrebiec8:49 p.m. EDT, October 15, 2012
What appeared to be a harmless tackle of Dallas Cowboys’ running back Phillip Tanner in the fourth quarter Sunday became the last play Ravens inside linebacker Ray Lewis will make this season. Lewis, 37 years old and a veteran of 17 NFL seasons, now has to decide whether the Ravens’ victory Sunday will also be the final game of his Hall of Fame career. A magnetic resonance imaging test taken Monday on Lewis’ right arm revealed the Ravens’ worst fear: a torn triceps, which is a rare but significant injury that will likely require surgery and an arduous six-month recovery period.Selected after offensive tackle Jonathan Ogden in the first round of the Ravens’ first draft in 1996, Lewis has become the face of the franchise, one of the NFL’s most respected players, and one of the most celebrated linebackers ever. Lewis always has been non-committal about retirement, saying only that he’ll know when it’s time. Ravens coach John Harbaugh declined to speculate on whether Lewis may have played his last game.
“That’s for Ray to speak on,” Harbaugh said. “I admire Ray Lewis. I’ve said that many times. I think everybody in this room does. Everybody that knows him feels that way about him. I’m looking forward to seeing what Ray says about that.” The Ravens are expected to put Lewis , on injured reserve as early as Tuesday, ending his season.Harbaugh was given the news by Ravens’ head trainer Mark Smith just before 4 p.m. Monday . He hadn’t spoken to Lewis as of Monday afternoon, but Harbaugh sensed in his conversations with Lewis following Sunday’s game that it could be a serious injury. Lewis was getting treatment after the game and not available to reporters. “Ray was worried about it,” Harbaugh said. “Ray said some things about his faith. He goes back to his faith, and he said some things that I’ll never forget. You look at his situation and what he’s accomplished and what he’s accomplished and what he was hoping to accomplish this year. He’s going to have to accomplish those things in different ways because that’s the way it’s gone. He puts his faith in providence. That’s where he’s going to go with that.”Ray made a game-high 14 tackles Sunday and his takedown of Tanner came after a 6-yard gain at the 2-minute warning. Lewis immediately shook his right arm before heading to the sidelines, where he watched the remainder of the game. Lewis took a knee to watch the game’s final frantic moments, which included a dropped two-point conversion by Dallas wide receiver Dez Bryant that would have tied the game, and a missed 51-yard field goal by Dan Baileythat would have won it.Lewis is a 13-time Pro Bowl selection, a two-time NFL Defensive Player of the Year and was the MVP of the Ravens’ Super Bowl XXXV victory over the New York Giants. The news of his season-ending injury prompted several players, including Washington Redskins rookie quarterback Robert Griffin III and Pittsburgh Steelers linebacker LaMarr Woodley, DeSean Jackson, Philadelphia Eagles wide receiver to use their Twitter accounts to wish Lewis a speedy recovery.
“Ray Lewis has helped progress this game so guys like myself have something to strive to be…a professional. Prayers sent up,” Griffin said.