Putting an end to harassment, beyond the billboards

The billboard over I-95 South just before Lincoln Financial Field shows Eagles star DeSean Jackson with Upper Darby bullying victim Nadin Khoury.  It reminds me of the most effective defense against bullying: us.

(Left) Nadin Khoury, 15 with his mother Rebecca at home in Upper Darby. Nadin was the victim of a bullying incident last year and has become a spokesperson for anti-bullying campaigns. Sarah J. Glover/Photographer

By us I mean members of society, the spectators in the stands.

On the billboard, alongside the words “End Bullying Zone” our favorite wide receiver uses his celebrity to cast anti-bullying as popular, socially desirable goal.

In a 2010 article, the American Academy of Children and Adolescent Psychiatry concluded that today’s bullies don’t just pummel kids for lunch money–they are often “popular or semi-popular social climbers . . . who use ostracism, ridicule, and gossip to gain social status.”

Think about it. If others (read: we) don’t stand around and watch the bully, laugh at insults, or chant, “fight, fight, fight!” then the bully has no audience, and thus, no act.

Summer break doesn’t stop bullying.  It happens on the playground, at the pool, on the block. Adults encounter bullies in the workplace, the boardroom,–heck, in the state legislature.

The bully in my neighborhood is a big, muscular kid 13 year old. I once watched him peddle around my son’s ball field on some other kid’s bike that he’d “borrowed”.  On day, a group of smaller kids asked the bully, “You gonna beat him up again?”

The “him” was my neighbor’s kid who sat silently against a fence. As the bully and kids approached, I did too, aiming a disapproving “Mom” look at the bully and his curious followers, who were drawn by anticipation. After several glances at me, they all slinked away.

I didn’t get a chance to talk to Jackson or the folks behind his DeSean Jackson Foundation, headed by mom Gayle Jackson (she was away at the Professional Football Players Mothers’ Association’s 15th annual Pre-Season Conference). But I did talk to Nadin.  Life has changed a lot since last year, when a group of bullies put him in a tree and recorded it.

He credits some of that change to a new school and some to his association with Jackson, who at the time surprised him on national television with an Eagles jersey.  “He bought me and my sister and Mom a plane ticket to the [ESPY] Awards. We got to meet a whole bunch of famous people. [Locals] would come up to me and say, ‘Aren’t you that kid . . . ?’ 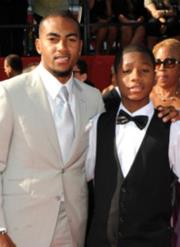 “Now, a lot of people know that people care. . . . I’ve heard recently that Lady Gaga is part of a [an anti-bullying] campaign, that Obama has a bunch of things,” he added. “They all think that it’s something that should not be tolerated, that people know it’s not cool that you’re saying this.”

Yes, someone cares, Nadin. And that someone should be all of us.

For more information on the DeSean Jackson Foundation, go to Foundation10.com or E-Mail Mrs. Gayle Jackson @ deseanjacksonfoundationceo@yahoo.com.  Thank You.