Philadelphia Eagles wide receiver DeSean Jackson made the day of many young fans Monday when he signed their helmets, jerseys and posters at an appearance at Modell’s.

Several fans were starstruck at they watched Jackson sign their items.

“Wait,” Zaki Thompson of Collingswood yelped, turning back after an encounter where he just grinned at Jackson. “You’re my favorite player!” he exclaimed before rushing off again.

Another boy clearly had high expectations: “He didn’t give me his phone number.”

Kristopher Hoagland was more impressed. He approached the autograph table confidently as the first person in line. Clad in a #10 jersey, his reason for coming out was simple.

Jackson came to the East Gate Square sports store to promote his June 29-30 football camp at Moorestown’s Upper Elementary School. (Click on flier, in the photo gallery above, for more information.)

“Growing up, I went to a lot of professional camps and it motivated me. As a young kid, the best thing you can do is be challenged,” Jackson said.

Jackson’s camp, now in its second year in Moorestown, includes an anti-bullying message.

“Bullying isn’t positive for society and we want to end the mess it makes,” Jackson said. “Athletes, celebrities, people who are seen in the news, can help with that by continuing to tell kids: It’s not OK to bully.” 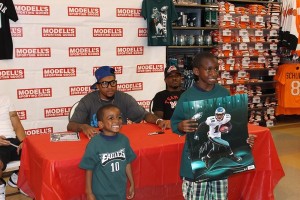 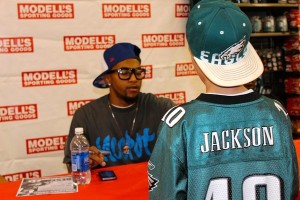