www.media.com
MICHAEL GREGER
Published: March 15, 2012 3:14 p.m.
Last modified: March 15, 2012 3:28 p.m.
DeSean Jackson formally accepted his new contract Thursday in South Philadelphia. The receiver, who has a love-hate relationship with the city, started by thanking God, then praised his family, the Eagles’ organization and the fans. “To the city of Philadelphia, I wouldn’t have liked to see myself play anywhere else,” Jackson said. “This has been a home to me since day one that I’ve been here. I saw this journey a long time ago, and I’m very happy that I’ve been blessed with this opportunity.” 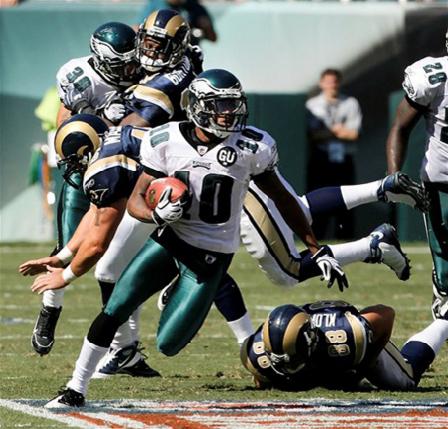 Jackson has $4 million worth of escalators built into his five-year deal. To reach all of them, he would have to reach four straight Pro Bowls, win four Super Bowls and notch 1,300 yards and 10 touchdown receptions each season. Jackson does get $15 million fully guaranteed. “I’m comfortable and I’m not greedy. I still have ways in my contract of making whatever I’m worth,” Jackson said. “As long as I go out there and play at the level I know I’m capable of playing at, with the money, the sky is the limit.”
Jackson referenced his late father, Bill, who died from pancreatic cancer during the 2009 NFL playoffs, several times. He said the two had envisioned this moment many times. “One thing my dad always said is that you can’t dream with your eyes open and you have to go to sleep and dream things and remember things,” Jackson said.